“Jesus Only Rebuked the Pharisees, Not Sinners” Is A Lie | Jesse Morrell

Posted on September 25, 2015 by OpenAirOutreach.com 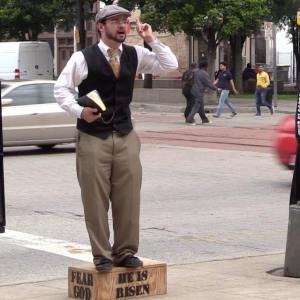 In an article about some of my fellow campus preachers, the journalist labeled them “Christian extremists” because they preached that homosexuality was sin, mankind deserves hell, etc.

“Christian extremists.” They were just regular Christians. Normal Christians believe that homosexuality is a sin, that all sinners deserve hell, etc. That is normal Christianity.

So “regular” Christians like to go around and threaten people with torture? And you consider this normal, acceptable behavior in a civilized society?

“Jesse Morrell, you’re delusional if you believe that Jesus preached “hell-fire” to “sinners.” As far as I’m familiar, he hung out with and loved “sinners.” All his “hell-fire” messages were reserved for pharisees like you”

The idea that “Jesus only rebuked the Pharisees, not sinners” is a lie. Jesus rebuked sinners for their sin, whether they were religious sinners or non-religious sinners. Jesus rebuked everyone that He loved, as He said, “As many as I love, I rebuke and chasten: be zealous therefore, and repent” (Rev. 3:19).

1 Response to “Jesus Only Rebuked the Pharisees, Not Sinners” Is A Lie | Jesse Morrell