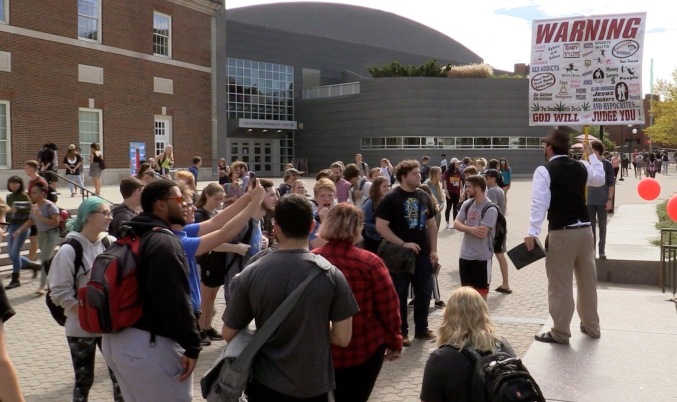 The University of Cincinnati is a great campus to preach on. A couple years ago the campus adopted a “sponsorship policy” to keep unwanted outsiders off campus. Their policy required a student group inviting you and sponsoring you to campus in order to preach. Such a policy is nothing more than censorship. And since it is a public campus, such a policy is unconstitutional. But praise God, after I challenged their policy a couple years ago, I haven’t heard anything from them about it since. I warned them that they were setting themselves up for a free speech lawsuit and they backed down. The campus is now wide open for preaching without hinderance.

A good size crowd circled around for a couple hours as I stood on a wall and preached against a building, holding a Scripture sign. I could tell that these students are not accustomed to encountering conservative street preachers. They were shocked by some of the most basic biblical truth. Many were careless, some were interested, and some were convicted. Good seed was planted that in time could take root and bear fruit. 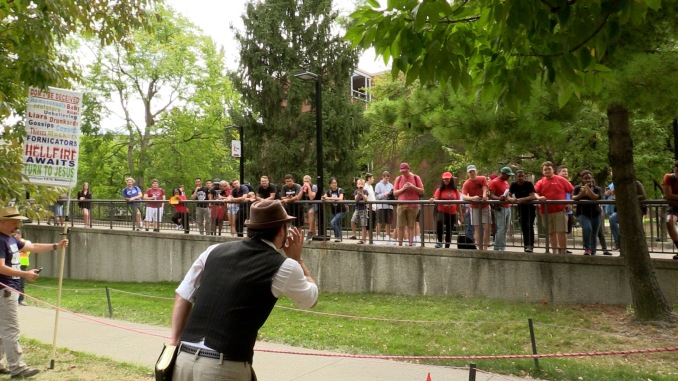 The University of Louisville does not have the best free speech area. It is slightly off the busy walkway and they rope off an area for you to preach in. It takes a lot of energy to round up a crowd but after maybe 30 minutes of preaching, I was able to gather listeners. All you have to do is preach on some hot button topics until you get one person to engage you in public debate/discussion and then a crowd will follow. 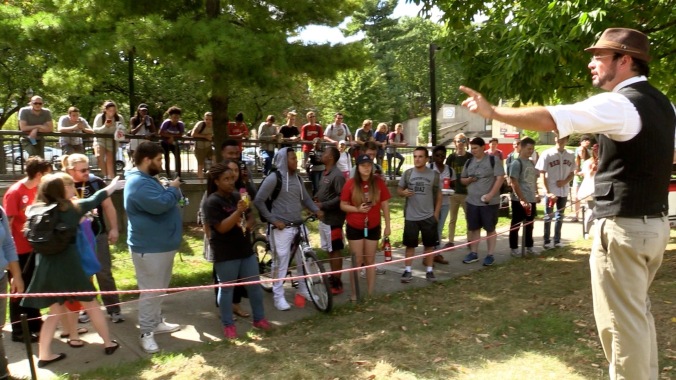 Eventually the crowd moved in closer and closer until they were as close as possible. Another obstacle on this campus, besides the not so good location of the free speech area, is the time limits that they put on each speaker. I think each person is limited to about an hour and a half. Usually, that is only enough time to get started on a campus. But we had a good size team with multiple brethren so we each got a “permit” which gave us all back to back time slots. It is nice to be able to “tag team” preach with other brothers. 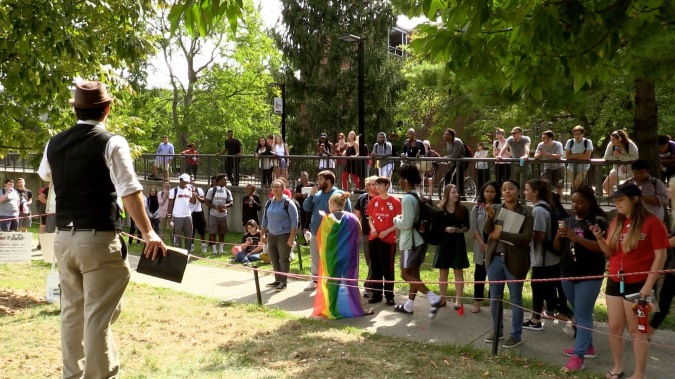 The video from this day is on my Youtube. One person said, “watching you be a mighty voice and preacher teacher is an amazing opportunity…via youtube… your team and yourself are so dedicated and hard working…so inspiring… and comforting…watching you from Hong Kong ..Huggs for GOD LOVERS”

I had been preaching on campus for a very short time when this group of students went and got these blow horns to drown out my preaching. They called them “Horns Against Hate,” because I was preaching against sin. But they revealed themselves as a communist group on campus! The leader of the group even had a ring on with the communist symbol. Communism has never been the friend of free speech, that’s for sure. 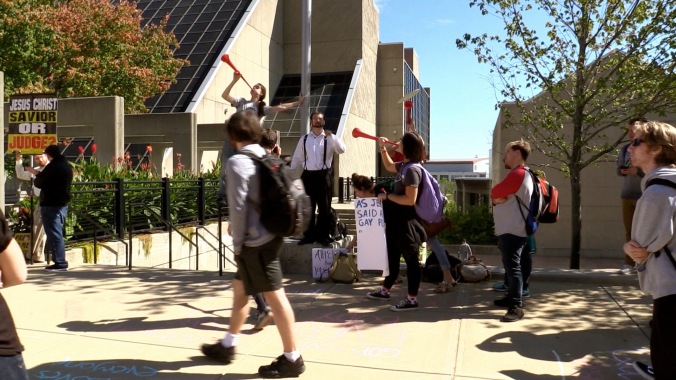 They crowded around and blasted their horns at me but eventually the Police came and shut them down for causing a disturbance. Imagine if a Christian group showed up on campus with horns to blast groups they disagreed with, like the abortionists or homosexuals! They would be arrested! But liberals use tactics that conservatives would never be allowed to get away with. 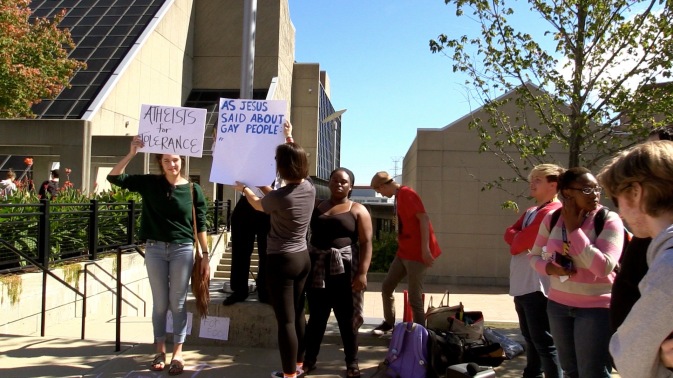 Another attempt at shutting down my speech was their signage. One sign said, “Atheist for Tolerance” but their protest was itself intolerant of my preaching. Another sign, which they held in front of my face, said Jesus said nothing about homosexuality. Jesus did say that a man will leave his father and mother and be joined unto his wife and the two shall become one flesh. The thing about these hand held signs is that their arms get tired so if I just keep preaching long enough, the protestors hold their signs down.

We returned to the campus the next day but this time preached in their amphitheater. The amphitheater was unavailable the first day because of a Gay Rights rally that was going on – I believe a drag show. Though we had gathered a larger crowd then they did so their drag show ended up coming to our outreach. Anyways, when we first started preaching in the amphitheater it was very empty but slowly and surely a crowd started to form. 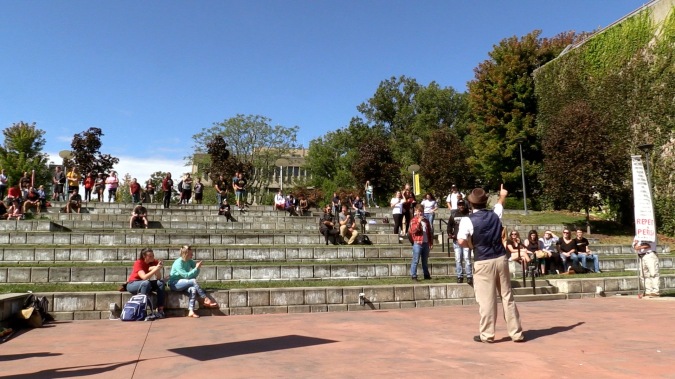 Nothing draws a bigger crowd on a secular campus than the bold proclamation of the gospel, especially if you boldly confront their sins. It wasn’t too long until the students filled the amphitheater, took their seats, and engaged us in dialog and discussion. The key with keeping their interest and attention is to answer their questions. Once the students realize that this is an open forum where they can expression their views and ask questions, they get hooked for hours. What an amazing ministry God has blessed me to be apart of. College Students gather around for hours and even days to talk about God and listen to the gospel!

Our YouTube Channel “OpenAirOutreach” has become an amazing tool for reaching the world with the Gospel of Jesus Christ. We have reached almost 5 million views and have 15,570 subscribers!

One of our videos this month, “How to Lovingly Street Preach to Homosexuals” has already been watched 23,000 times! Praise God! You can watch that video here: https://www.youtube.com/watch?v=lOlhRnKtog8 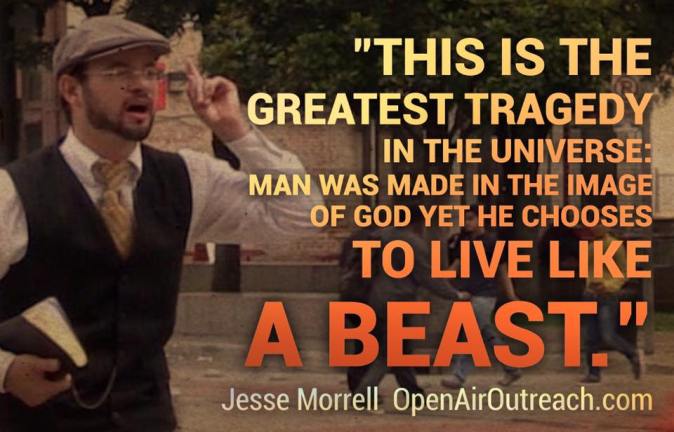 I started an instagram over a year ago and it was going well with 1,700 followers, but I posted my very first street preaching video to it and somehow my whole account got shut down for “hate speech.” 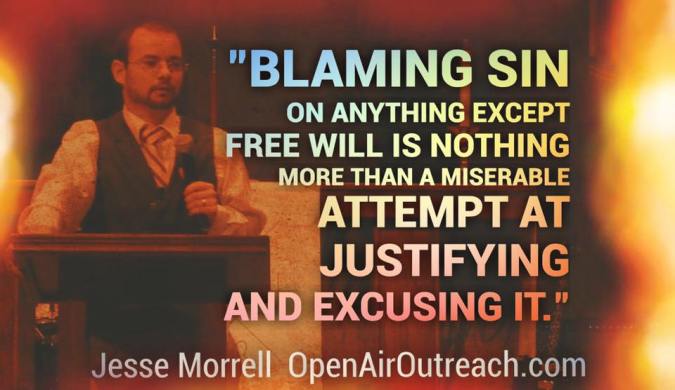 WE ARE REACHING THE WORLD FOR CHRIST!

As you read these testimonies of brethren being inspired and sinners coming to repentance, please be sure to lift them up in prayer!

THEY ARE WATCHING IN BRAZIL!

THEY ARE WATCHING IN HONG KONG!

“I’ve learned so much from you .. I watch all your videos from Hong Kong ….Hallelujah

SHE TURNED FROM SIN AND TURNED TO GOD!

Praise God we are making a difference around the world!