I know the Cure for Cancer! And it’s FREE!

Posted on December 14, 2018 by OpenAirOutreach.com 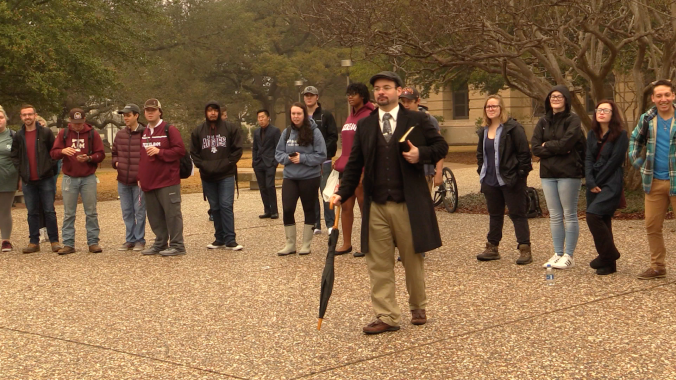 Texas A&M is a wide open campus with tens of thousands of students. You can walk on to this campus and start preaching without any problems. That isn’t true for every campus in Texas.

It was rainy while we were on campus but it didn’t rain consistently. It stopped for most of the time we were there. I started off by engaged the homosexuals and lesbians on campus. There is a group of them that remembers me from years past. It’s great to have a continual influence into their lives. 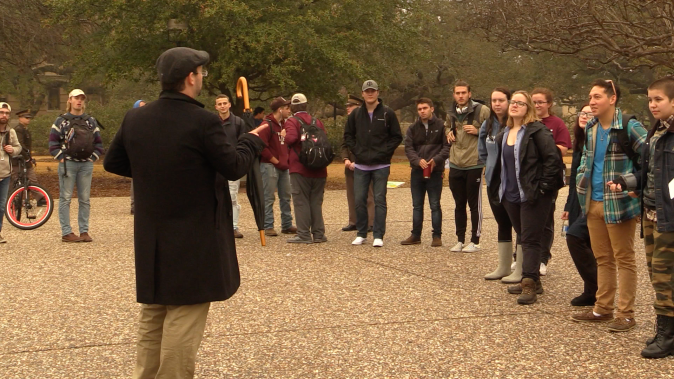 This is a great campus for Christian Apologetics because the crowd is engaging but not hostile. They gather around and listen, ask questions, heckle, etc. That is really the ideal for open-air preaching. We don’t like the hostility or violence that we sometimes are met with. We want good interaction with unbelievers.

A sin I preach against on every campus is sexual promiscuity. It is really damaging and destroying our country. I preached, “1 in 3 college students has an STD. You are more likely to graduate with an STD than a PHD!” I went on to expose the foolishness of sin and to explain the wisdom of God. My strategy is to open their eyes as to the stupidity of sin and to the goodness of God, to help turn them in repentance from sin to God. After all, it is the truth that can set them free!

I explained, “I am not a medical doctor but I have studied this topic a lot. A 21-40 day water only fast has been medically shown to kill cancer. Your normal cells can survive a prolonged water fast but cancer cells simply cannot survive under such conditions. Fasting starves the cancer but not the body. The body doesn’t actually starve until around 45 days of fasting. If I were ever diagnosed with cancer, the first thing I would do is a 21-40 day fast. After that, I’d break the fast with healthy juices like carrot juice, and maintain a healthy diet with regular fasting.” I then went on to explain other health benefits of fasting like lowering cholesterol, preventing heart attack and heart disease, curing auto-immune disease, healing inflammation and fatigue, etc.

One student in particular was impressed with my knowledge of fasting and its health benefits. He listened to the preaching for a long time and then shook my hand afterwards. I guess that means he learned something he was grateful for.

My primary message on campus was about Sin & the Savior. Everything else is a side topic from the main issues. As America drifts further and further into sin and wickedness, we must preach louder and louder the warning about Judgment Day. I wish every campus in America had a voice calling out to them to repent! Praise that God raises up a voice on every campus across the country!

The Nightlife of College Station, TX

Since College Station is a College town with tens of thousands of college students, it also has a bar and club district to service the party scene. What is great is that we not only preach to the students during the day, but we get to preach to them at night as well! They just can’t get away from the message of the Gospel!

One of the brothers who joined me on this trip is named Sebastian. He came to two of our evangelism conferences in the past. He was the first brother to start open-air preaching and he got a nice group of people to stop and engage him. He is a very animated and lively preacher! That is essential for a street preacher who wants people to stop and listen! 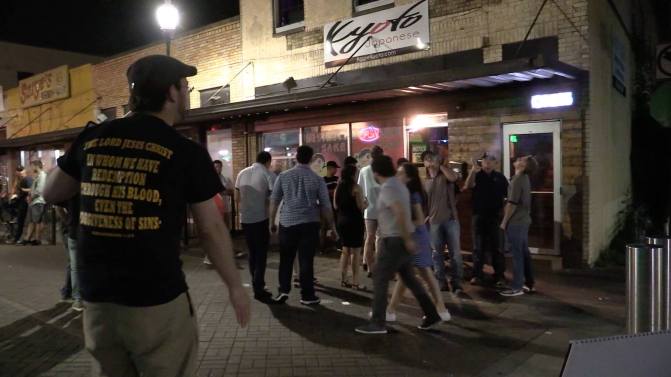 As the night progressed we moved to another location that had more people, just a little bit down the way from where we started. This location is where a lot of the bars and clubs are. You can stand right in front of them on this busy street and preach the Gospel.

What’s great about preaching outside the bars and clubs is that you catch them in the very act of sin! It is easier to convict them of their sin that way. And you know exactly what sins to preach against!

While I was preaching there was one sinner who came up and started dancing like a fool. He was trying to entertain the crowd, get attention, and make light of what was going on. But another student that night recognized me from Youtube. He seemed very convicted of his sin. I ministered to him for a bit before he left with his friends. This showed the diverse response you get out there. One man dances like a fool while another man is heavily convicted. But even the man who was dancing like a fool saw us later and became very angry. That too showed that he was convicted.

Most sinners start out as careless but as we continue to minister to them, they start to enter into conviction. Anger is their usual response to conviction.

My friend Jonathon shared the soap box with me as well. He does ministry on the campus and has a big heart for outreach and evangelism. Pray for him please. He does regular outreach to this nightlife now and he has a good team that goes with him, including his pastor. It’s great when you have a supportive church and pastor. Every church should have an evangelism team that goes out faithfully! 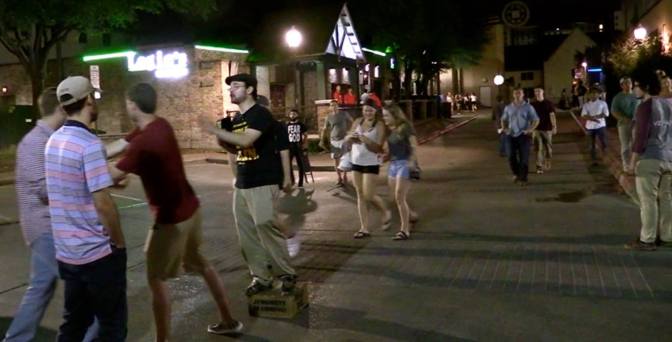 Towards the end of the night we moved again to a quieter location to get away from some loud music. This was a high foot traffic area. It also had a wide open space for a crowd to gather. That made it an ideal location. Since it was quieter at this location, everyone could hear us loud and clear as we urged them to repent and believe the Gospel.

WE NEED A MOVE OF THE HOLY SPIRIT

TO BRING DEEP CONVICTION OF SIN

I remember so well how the Holy Spirit came to me in my prison cell, 18 years ago, and ripped the blinders off my eyes. For the first time, I saw myself as I really was – a rotten filthy hell-deserving sinner. I was dark, I was sinful, I was selfish, I was hateful, I was evil.

He ripped away from me all my excuses and showed me how I was responsible for my actions. I had no one to blame but myself, as I was making my own choices and all shifts of blame were falsehoods. I saw how wicked and evil I had grown to become and He convinced me that God would be completely justified in damning my soul forever.

And He didn’t relieve the weight of my guilt and conviction. He left me to roast in the oven of conviction for a few more months to prepare me for the gospel. I tossed and turned tormented inside that I was damned and I knew no hope or way of escape. He left me in conviction until I came to the point of genuine repentance – where I didn’t want to be a sinner anymore – and showed me through the Scriptures how I could be forgiven through Christ.

The problem with most evangelism today is that it doesn’t seek to convince the sinner of his exceeding sinfulness – that he is fully responsible for his sinful condition and that his eternal damnation would be justified and right. Modern evangelism just wants the sinner to briefly acknowledge that he has sinned and then immediately trust in Christ for salvation when there is no deep conviction or deep repentance. This is the reason for so many false converts in Christianity today.

In order to have a revival in America, we must see sinners crushed with the conviction of sin, to roast by the Holy Ghost in their guilt and deservingness of damnation. That is the proper preparation of the heart for the Gospel of Jesus Christ. Then we will see sinners abandon their sinning and cling to Christ for salvation, to flee from the wrath that’s to come.

MY FRIEND ENJOYING ONE OF OUR

This is a picture a friend of mine took while he was vacationing at the beach. He was reading “The Atonement” by Albert Barnes, a classic Christian book that I reprinted in my bookstore.

Albert Barnes said, “His sufferings were in the place of the penalty, not the penalty itself. They were a substitution for the penalty, and were, therefore, strictly and properly vicarious, and were not the identical sufferings which the sinner would himself have endured.” He also said, “The atonement is something substituted in the place of the penalty of the law, which will answer the same ends as the punishment of the offender himself would. It is instead of punishment. It is something which will make it proper for the lawgiver to suspend or remit the literal execution of the penalty of the law, because the object or end of that penalty has been secured, or because something has been substituted for that which will answer the same purpose.”

Making a Difference for the Kingdom of God!

” I used Jesse’s advice recently and our street preaching event went very smoothly when the police were called.” David

“Hi Jesse, thank you for your very hard work that you are preaching the Gospel! It is so inspiring me and I want to do hard work for Christ too. Your life for Christ shows an example of how real Christians should live with passion for Christ to save souls! Bless you!” Igor

“been watching your videos for days… Because of you guys I quit smoking weed… I was a hypocrite and I was lukewarm but God showed me he was going to spit me out and now I’ve been on the straight and narrow..I didn’t believe that I could quit sinning until I read bible verse be ye holy for I am holy..best decision I’ve ever made in my life.. I spend most of my days reading the Bible and watching street preaching videos because that’s where I feel I need to be I greatly appreciate you guys and in this day and age in this generation with their stubbornness and hard hearts you have to come at them the way you do with the truth it’s the hard truth but that’s how they need to hear it because of they’re stubborn hearts” Tina

December is usually a hard and difficult month for us as our financially support usually slows down this time of year, so please remember us and our missionary work this time of year. Thanks!